Cover(ing) Sexuality and Female Worth

Posted by Jillian
Covers. Sad to say, but they are often what first draw us to novels in the first place. Many a time, it’s not a plot summary that wins me over to read a book. . .but a cover. Pretty covers hide bad books, and bad covers hide great books. After a while, it just becomes a guessing game as to what you’re going to get -- a bit like closing your eyes and digging your hand into a box of chocolates.

Before I lead you astray and make you think this post is going to be about pretty covers hiding bad books, it isn’t. Rather, this post is about one cover. . .or, actually, the undertones and messages one cover is sending out like one big blaring subliminal message. 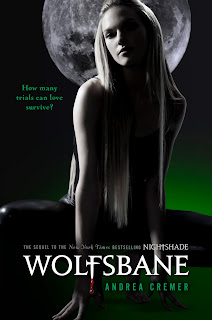 This is the new cover for Andrea Cremer’s Wolfsbane (Philomel, July 2011), the sequel to her debut novel Nightshade. Now, you may look at it and see a girl looking ready to shift into a wolf and howl at the moon. I, however, do not. Instead, I see a girl crouched on a rock in a suggestive pose, come-hither eyes blazing at the onlooker. If the cover were a scene in a book, I would say that a boy with lust flaring off of him would be striding towards that girl, ready to do bad things to her under the light of a full moon.

At first, I thought I was just being too critical or analytical, looking for meaning in the image that really wasn’t there. But, when I raised the red flag and showed my fellow Goodreaders and Book Lantern bloggers the cover, many of them reacted the same way I did, saying that the cover seemed to be trying to be an urban fantasy cover. Well, that’s all fine and dandy. . .but urban fantasy is commonly read by adults. This book is for teenagers.

Now, Nightshade and I are no strangers to each other. I read the book in ARC format back in July 2010 and found it to be a very readable commercial work with intriguing characters and an interesting take on werewolf mythology. The main issue I had with the story, however, was the common formula of a virgin heroine and two boys, human Shay and fellow wolf Ren, vying for her attention and adoration.

Just like the calla lily for which she was named, the heroine Calla is pure white as the driven snow -- but, over the course of Nightshade’s 452 pages, she has a bit of a sexual awakening as a push-and-pull game ignites between Calla and her two suitors, both of whom never fail to thrust themselves at her and pin her to walls and all that he-man mumbo-jumbo. Shay kisses her. Ren kisses her. Shay makes out with her. Ren gropes her. Back and forth. The book doesn’t hide that it is very sexual in nature -- but neither do many other paranormal YA books that try to get under the radar by promoting ‘chaste romances’ with ‘feminist heroines.’

Feminism. That word’s thrown around a lot in the YA world these days, isn’t it? One must begin to wonder if it is beginning to lose its meaning. Would supposedly feminist characters really let sexual desires control their decisions and thought processes? Would they degrade themselves to be wanted for their sexual appeal above all? My point is this: Are women to be deemed valuable by their sexual worth alone? Is a heroine’s virginity the final prize that one of the two boys must win?

It certainly seems as though recent YA books are throwing around these themes and messages, unknowingly or not. Just look at Twilight. The main crux of the last two books is that Bella must get laid by Edward. That is her choice and one of the main reasons for which she chooses vampirehood over a human lifetime. Her sole ambition in life is to be Edward’s; that’s it. Look at Evermore. What’s the main kink in the plot? Ever has never ‘sealed the deal’ with Damen in any of her past lives, and she’s ‘the one that got away’ every time. Thus, he follows her life after life, hoping that each lifetime will be the one where he finally has her.

Is that why these books are popular? Because, in every single one, the girl is the one that must be gotten, claimed, and used for her sexual worth? Well, now, that’s an interesting message to send to teenage girls. I don’t care if the heroine is willing and begging all book long to be taken to bed for a fade to black moment. My issue is that these are stories targeted at young women who, without any help from literature or other examples, could go out and find their own bad boys to treat them wrongly as only objects to be possessed. They don’t need cues and hints from literature that should be teaching them better, that men and women should stand as equals both inside the bedroom and outside of it.

Another issue with sexuality in YA is that many heroines don’t deny the advances towards them -- rather, they welcome it -- but then many of them turn around and call any other female character who is making out with a guy or having sex a slut or a whore. Well, now. Is the sexed-up behavior that these heroines engage in somehow better because there is love attached? Is that how their sexual power is so much more acceptable? And is that how Zoey Redbird of The House of Night gets away with her non-sexcapades too? By calling it her right as her sexual power?

Yeah, I’m not buying it either.

In truth, I can’t say I’m an advocate for censorship when it comes to sexuality in YA. While I do sometimes think that sexuality is oftentimes mishandled or written into young adult stories irresponsibly, I would much rather teen girls learn from books than firsthand experience. Books are like the glass through which parts of the world can be seen but not touched. If a teenage girl finds out more about sex through a book rather than through a teenage boy’s clumsy touch -- well, I know what I think the better alternative is.

But YA isn’t at that point yet where sex among teenage characters is handled well. Like real life, YA offers a clumsy experience that is awkward, embarrassing, and sometimes a bit mortifying -- but teen readers who don’t know any better think it’s the real deal. They should want what is in those books. That is what real love and sexual desire should be like -- teetering somewhere on the spectrum of abuse, lust, possession, sexual harassment, rape, sex, stalking, and violence. Are those really the kinds of messages that should be given to teenage minds?

Authors and publishers, please be more responsible. You have teen readers out there, ones who are looking for alternatives to Hollywood answers and cheap thrills. Don’t just give them the fantasy experience where boys cater to girls and their evey whim and where girls are prizes to be won and trophies to display. That is not real life, and it is a disservice to any teenager to make it seem as though that is even a good option. Girls shouldn’t want to be objects at all: they should want to be seen and loved for who they are and not what they can offer in the bedroom. Do more for them than that.

Give them stories that make them hope and dream but also realize that love isn’t as simple as affection, intimacy, and sex. Real love is so much more complicated but so much more fulfilling.

Give them covers that aren’t right up there with magazine covers and pin-ups with femme fatales on spotlight front and center. Real girls will never be just an image emblazoned on a cover, giving lusty eyes to the viewer in a way that says ‘Take me, please.’ They are so much more, and they deserve so much more.

Show them and make them believe it too.

(For more of an in-depth discussion on the external images of YA, check out "YA's Image Problem" by Sean Wills of The Interrobangs.)