Why Mattie Ross is my new feminist fictional hero and what the YA heroines of today could learn from her.

Posted by Cory
By: Ceilidh of The Sparkle Project 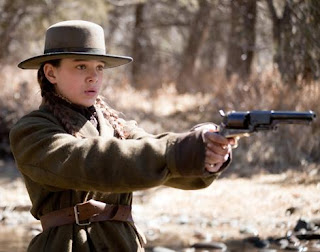 Gather round the fire/blog while I tell you the tale of a no nonsense teenage girl who fights adversity, prejudice and the harshness of the world in order to exact revenge on the man who killed her father. Her name is Mattie Ross and she is the protagonist of Charles Portis’s celebrated but oft forgotten novel “True Grit”, and the movies of the same name, and I highly recommend her story to every YA fan out there who’s sick of simpering love obsessions and stalker romanticists.

I’m not a Western fan. I grew up watching colorful cartoons, roaring adventure movies and galaxy fighting rebels so the guns ‘n’ cowboys genre held no interest for me, especially since I really couldn’t understand a word half of them were saying. So it’s sort of ironic for me, as a book loving feminist YA nerd, to now hold a Western novel from the 1960s as a fantastic example of a strong teenage heroine in literature. After what feels like an eternity of trudging through books with simpering heroines, described as brave and smart but displaying traits that are anything but those, who obsess over boys, the lack of boys in their life or the all consuming relationship that defines them as a person, it’s strange that I had to turn to a Western novel that’s older than my parents to find a teen hero to look up to. Luckily, Mattie offers me everything I ever could have hoped for in a YA heroine, even if the genre doesn’t quite fit (the book is perfectly suitable for teenage readers, although the language does take a bit of getting used to. I also highly recommend the Coen Brothers’ recent adaptation of the book, which is much better than the John Wayne version and actually centres the story around Hailee Steinfeld’s Mattie and not the show-boating Wayne in full John Wayne mode. Steinfeld was robbed of an Oscar even with the category fraud, but that’s a post for another blog.)

The men of Westerns are generally depicted as swaggering figures of masculinity, the manliest of men who can drink you under the table then shoot the hat off your head before you hit the ground. While some characters do fit this description, notably Rooster Cogburn, the U.S. Marshal Mattie hires to help her in her quest, the hero of our piece is the exact opposite of this supposed heroic figure and still manages to be braver and stronger than any man in the story. She’s highly moral, stubborn, old fashioned, very mature for her age, determined to the point of single-mindedness, practical and not one to let a little thing like her age, sex or the constraints put against women in the era get in her way of completing a typically masculine task of revenge. On top of being the exact opposite of a Western hero, she’s the anti-Western woman and all the better for it. She’s got a sharp tongue and an even sharper mind, neither of which she is afraid to use.

Right now in YA, predominantly amongst the most popular novels (mostly paranormal romance), the typical teenage girl seems to be a simple creature mostly concerned with the men in her life and how she can act around these men. We’ve all bore witness to the Bella Swans, the Nora Greys, the Zoey Redbirds and the increasing numbers of so called heroines who care about nothing but the obsessive, all consuming love in their lives, which often ends up eliminating everything else from their lives, including friendships, family, ambitions and even life itself. Love and feminism aren’t mutually exclusive, but when it becomes the sole defining characteristic in a character’s life, it’s hard to defend them. With Mattie, romance just doesn’t enter the equation, and this makes me way too happy. How can a character kick arse when all she does is worry about a guy who treats her like dirt? Even if romance isn’t in the equation, why is it okay for young women to let men walk all over them? Watching Mattie fight back against the sexism, ageism and general ignorance of the men around her is not only highly satisfying, it’s damn entertaining!

One of the reasons I love Mattie Ross so much is that she’s human; for all her moments of extreme precociousness and bravery, she’s still just a kid. Sure, she’s smarter and braver than I’ll ever be but she still feels real. Her strength is unbelievably inspiring, even coming from a fictional character; even when she’s fighting against everything thrown against her, she doesn’t give up. When she’s humiliated and fighting against the impossible, she rises up and keeps fighting. She doesn’t let anyone push her around, even when such things seem inevitable. She fights for respect and rightly earns it, instead of having complete adoration handed to her on a silver platter. She’s highly spirited and, as cheesy as it is to admit out loud, a complete joy to read about. While Mattie describes Cogburn as being the one with true grit, it’s clear that such compliments are more deserving closer to home. The heroines of today could learn a lot from Mattie Ross.