Posted by Cory
by: Ceilidh of The Sparkle-Project 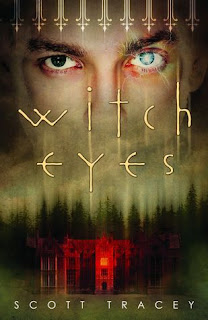 Now that the Wicked Pretty Things story has reached its climax with the anthology being cancelled, the YA world, writers and readers alike, have been asking a few questions about LGBTQ content in teenage fiction, with a special emphasis on paranormal fiction. When I concluded the original Sparkle Project, I remember thinking how incredibly white and incredibly straight the paranormal genre was. Granted, there were occasional and often cringe-worthy instances of tokenism with supporting LGBTQ characters but there were never any LGBTQ romances at the centre of the story, much less gay heroes and heroines. But the times are a-changing and we've got people stepping up to the challenge.

Scott Tracey, an upcoming debut YA author, whose book "Witch Eyes" will be released in USA on September 8th by Flux, is bucking the trend by having a gay hero at the centre of his paranormal YA novel. Scott was kind enough to answer a few questions from this blogger who has never done an interview before!

1. In the aftermath of the Wicked Pretty Things fallout, there's been a lot of questions swarming around the blogosphere as to the general attitudes towards LGBTQ content in young adult fiction. In your experience as a forthcoming debut YA writer, how do you feel the attitude is towards such content in teen lit? Do you think the Trisha Telep/Running Press mess was a small blip on the radar or indicative of larger things?

With authors, (at least in my experience) there's a sense of camaraderie and acceptance. YA authors support one another. Whether they're talking about bullying (like the YA Authors Against Bullying initiative), raising money for charity (such as the Nashville relief efforts that went on last year), or about gay issues. The community pulls together, and I think that reflects a lot in the writing itself. More and more, we're seeing LGBTQ characters reflected in books where they might not have appeared ten or twenty years ago. There's open-minded content out there, because there are open-minded authors creating it.

There might be more resistance and fear from readers, but that's only because the numbers are so much bigger on that side, so you're going to see a lot of differing viewpoints you don't get in a group of authors. But overall, I think the Running Press thing is more of a smaller blip than a pervasive attitude. If for nothing else that blatant homophobia or heteronormative attitudes are bad for business.

2. While my experience with YA has been that it's much more progressive on the topic of gay content than many areas of media, there are still so few books where the hero's sexuality is incidental, and even fewer paranormal YAs with an LGBTQ hero/romance at the centre of it. Why do you think this is?

We're getting to that point, and I think all we're waiting on is one big spark. Similar to the way a trend begins. One book comes along and creates a lot of interest in a particular kind of story - faeries, angels, dystopian. Only this time, it'll showcase a character who isn't defined by his or her sexuality. Once that happens, and people see that there's a market for stories like this, we'll see even more mainstreaming of LGBTQ characters and fiction. At least, that's my hope.

I also think that we're in the middle of a turning point in LGBTQ literature as a whole, now. We're starting to see more and more examples of sexuality being completely incidental - simply another aspect of a character. Characters and journeys that aren't defined by being gay or lesbian. This is huge - being represented in fiction normalizes things that are unfamiliar. For some people, the only gay people they might know are the ones in a book.

3. Did you ever have any worries that your own book would be rejected on the basis of the LGBTQ content or that you'd be asked, like Jessica Verday, to change it?

Oh, totally. But I also thought my book would be rejected because it was about witches, because it had a male narrator, because it was in first person, because it was set in the Pacific Northwest...I mean, you name it. Every writer feels strongly about their work, but if you're being realistic, there's always the chance that someone else won't feel as strongly about it as you do. That's why it's so important to love what you've written, and to want to stand behind it.

There were two extremes in my search: on the one hand, I think having a gay protagonist actually CAUGHT some agents' interest where they might not have been interested before. And on the other hand, it also took a year and a half for my first book to sell. I actually was asked, several times and in several different ways, to consider changing the book. Not only was I asked to consider changing my main character from a male to a female (and thus making it a straight romance), but I was also asked to drop the romance, and add in a female cohort to balance out a light-in-tone, gay guy/straight female story (which is pretty much the exact opposite tone-wise of the book that I wrote).

That's why I was so happy when Flux offered. My editor, Brian Farrey, loved the story exactly as it was, for all the same reasons that I loved it. And Flux has been putting out some absolutely fantastic LBGTQ-supportive fiction.

4. Many paranormal YA books have supporting LGBTQ characters that are depicted in an extremely stereotypical manner and reduced to clichés, or a token role. While the debate still rages on in all areas of LGBTQ media as to whether any visibility in mainstream entertainment is good visibility, what's your attitude towards it? Is it better to have a clichéd, and possibly harmful, LGBTQ depiction than no depiction?

I think the worst thing you can have is a harmful representation. I've heard horror stories from friends about writers who equated "edgy" with "gay." As in, they felt the character needed more edge, so they made him or her gay. The telling feature, though, is more about the author than the character. You can tell when an author or a writer doesn't have any gay friends. Because they say things like "making that character gay."

I definitely disagree with the idea that LGBTQ people need to be represented all the time. That just leads to token representations. As with any character, they should be the way they are because that's part of the story. One-note characters of any type can be harmful. The trick is to have characters who are more than one-note.

Some of my favorite books: The Perks of Being a Wallflower, anything by Alex Sanchez, Geography Club, Ash and Huntress, Hero, the Vast Fields of Ordinary.

One of my favorite characters is Alec from the Mortal Instruments series. There's stress and drama through his journey, but it never really falls into a place of melodrama. He struggles, no one cares, moving on. His sexuality is handled so matter-of-factly through the story, it's refreshing and shows how characters can still struggle with their sexuality in a story, without having that aspect DEFINE them. Second up is Jenna, the vampire from Rachel Hawkins' Hex Hall series. Jenna is such a refreshing blend of so many different elements, and again, her being a lesbian is just one aspect of an already full personality.

6. What new things do you think your book, Witch Eyes, will bring to the already packed table of paranormal YA?

Well, I think that first of all, Witch Eyes hits one of the points that you mentioned above. Braden (the main character) is gay, but his sexuality is completely incidental to the plot of the novel. He's gay, but it's never really an issue. It is, in fact, one of the MOST normal things about his journey.

As for other things that may or may not make the book stand out: It's about a flawed character. Braden makes mistakes, he's impetuous and wears his feelings on his sleeve, and he's not always as smart as he thinks he is. Which is dangerous, because Witch Eyes takes place in the town of Belle Dam, where it seems like everyone has an agenda. Even the incredible power he has - the witch eyes - are mitigated by the fact that they're essentially killing him slowly. And he's coming into a situation where there are two factions who want his power desperately, and neither side is necessarily "good." Belle Dam is a city steeped in mysteries and secrets, and the town itself is being treated like a giant chessboard - Braden is only one of many pieces.

I don't think the book is necessarily a gay urban fantasy novel, so much as it's an urban fantasy novel where the main character just happens to be gay. There's a romance in it, but again, it's handled like it's no different from a straight romance. Like I said before, his sexuality is about as important as the fact that he has brown hair. When I wrote it, I wanted a novel that wasn't steeped in the character's sexuality, and how hard it was to be gay. I wanted that to be the thing that was most normal. And this is the end result.

For a similar discussion, on her blog, Malindo Lo talks about selling LGBT novels.