The 4H Revolution Is ON: Review of Sister Mischief 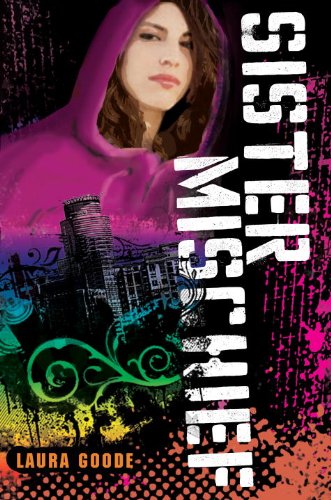 A gay suburban hip-hopper freaks out her Christian high school - and falls in love - in this righteously funny and totally tender YA debut, for real.

Listen up: You’re about to get rocked by the fiercest, baddest all-girl hip-hop crew in the Twin Cities - or at least in the wealthy, white, Bible-thumping suburb of Holyhill, Minnesota. Our heroine, Esme Rockett (aka MC Ferocious) is a Jewish lesbian lyricist. In her crew, Esme’s got her BFFs Marcy (aka DJ SheStorm, the butchest straight girl in town) and Tess (aka The ConTessa, the pretty, popular powerhouse of a vocalist). But Esme’s feelings for her co-MC, Rowie (MC Rohini), a beautiful, brilliant, beguiling desi chick, are bound to get complicated. And before they know it, the queer hip-hop revolution Esme and her girls have exploded in Holyhill is on the line. Exciting new talent Laura Goode lays down a snappy, provocative, and heartfelt novel about discovering the rhythm of your own truth.

Sister Mischief is one of those books that only comes once in a while - a book about identity that, instead of making universal statements, focuses on individuality.

Have I mentioned that I love character-driven novels? Well, I do. And as far as characterization goes, this book doesn't fail to deliver - our protagonist, Esme, and her friends Rowie, Tessa and Marcy are a group of hip-hop loving, open-minded seventeen-year old girls, who strive to express themselves in a mostly Christia...moreSister Mischief is one of those books that only comes once in a while - a book about identity that, instead of making universal statements, focuses on individuality.

Have I mentioned that I love character-driven novels? Well, I do. And as far as characterization goes, this book doesn't fail to deliver - our protagonist, Esme, and her friends Rowie, Tessa and Marcy are a group of hip-hop loving, open-minded seventeen-year old girls, who strive to express themselves in a mostly Christian school, in a very Christian community.

What's this? Is my audience crying 'Easy A' somewhere in the background?

Well... I don’t know. I’ve never seen the movie. I’ve heard TGWTG talk about it, and from what I can tell, Sister Mischief is not the same, at least when it comes to satirizing the Christian right. There’s the potential for that, but thankfully, the author takes a different approach... but more on that in a sec.

This is a book about identity, and finding your place without necessarily having to be an outcast. The portrayal of teenagers is superb - throughout the book, I could feel Esme's loneliness, Tessa's confusion, Rowie's insecurity (Marcy is badass, though. She steamrolls through the obstacles and isn't afraid to say her mind). I could see their confusion, and how they turn to their own different mediums to sort through their problems. The novel explores the different ways in which religion, peer pressure, culture and even nurture can be crucial to a person's growth without, you know, getting in your face about it. Esme is a lovable, non-practicing Jewish, lesbian heroine, and you can’t help but enjoy her narration, not least because she’s constantly writing lyrics in her head for the soundtrack of her life.

Hip-hop, of course, plays a big part in the whole book, and not only as a way to appeal to the audience. The girls actually wonder if it’s their place to dabble into a genre born from oppression and a fierce fight for liberation. However, as the book progresses, it becomes very clear that this is exactly their place and their genre and their medium of expression. Finding their place in a mostly Christian community helps them face their own demons and find peace within themselves.

Oddly enough, the girl whose struggle is the most difficult in that aspect isn’t our titular character, but her friend Tessa’s. Unlike Esme, Tessa in the textbook SWASP – she’s Barbie-doll gorgeous and comes from a wealthy background, but moreover, she is Christian and believes firmly in her religion. Now, her being friends with Esme, Rowie and Marcy and supporting them poses a lot of problems for her, because she is made to feel like she has to choose between them and her religion. In the hands of a lesser author, that kind of conflict would have come out as contrived and melodramatic, but Goode handles it with a delicacy which is not often seen in YA. Tessa is Christian, but she isn’t judgmental or snobbish towards her friends. Instead, she embraces the notion of Christianity as a religion that promotes love above all else, and this is a message that makes her a much more complex character than the other representative of the SWASPs, our antagonist MashBaum who is the Marianne of this book.

Esme and Rowie's relationship was beautiful and heartbreaking at the same time. I found their characterization almost painfully real, and while I wish their storyline had been more developed, it doesn't lessen the merits of it. It was strange seeing how different their sexual awakening was to them, and how it affected their relationship, both as lovers and as friends, but, again, I found it to be relatable and visceral.

All in all, this is a fabulous book, and while there are definitely some flaws to it, it is still one that I'd recommend to everyone who loves reliable, charming characters and really kickass writing.

Note: A copy of this book was generously provided to me by the publishers via NetGalley for reviewing perposes. Sister Mischief is due to come out on July 12th. <!--[if gte mso 9]>