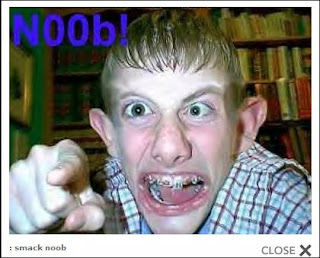 Bloggers have taken it upon themselves to school authors in basic author/reviewer etiquette. The general consensus is that authors should avoid commenting on their reviews in order to save face. Just a few days ago, there was a discussion on whether or not YA authors should voice their political opinions because they might subliminally program their readers into making bad choices or seeing opposing view points. That's an overstatement, but it generally sums up the opinion of a few YA bloggers: teens are idiots who can't think for themselves.

But what happens when the shoe is on the other foot? I know most of you heard of the Be Nice incident surrounding Becca Fitzpatrick's post on livejournal. Some interpreted it as an article to scare off bloggers from writing negative reviews lest they destroy their future writing careers. Others took it as the best advice they'd heard in years and ran off to delete any negative or overly snarky reviews they might have written, ignoring the fact that reviews aren't written for authors, agents, or editors. That's what a beta reader/critique partner is for.

But now that we've seen the other side of the curtain, here is my question to you: who will keep YA bloggers inline?

On internet forums, we have moderators. They can ban trolls and delete their comments, but if you've ever been to FanFiction.net, you know how useful they are.

On YouTube, there are countless rude comments, probably made by teens who were just graced with a computer.

And on GoodReads, there are those who simply don't understand that the internet is indeed public. Anything you say, unless it's through a private message, can be viewed by the public.

That doesn't mean that you don't have rights. Just a few days ago I gently explained to several people that GoodReads does not own the rights to your reviews anymore than YouTube owns your videos or FanFiction.net owns your fan fictions. The sheer amount of ignorance and misinformation on the internet is astounding. There's that little thing at the bottom of every page called Terms of Use. While it is highly convoluted and difficult to skim through, it will tell you that nearly every website owns everything except for user content. If your comments or reviews are being used on a website without your permission, you have the right to ask for them to be removed.

Regardless of that, the internet is still a public place. If you call so and so blogger a dirty name, it will come back to bite you. Anyone can link to your comments or reviews without permission. In English class, that's called a citation. If you really must defame someone online, remember that the internet is a small place. Information gets around. Just a few days ago, I rated a book with plans to review it. It gets back to me that the author of said book mentioned my rating in an interview with her agent. Long story short, I remembered to review the book and said author might have appeared a little foolish or petty afterwards.

It would probably be smart to keep inside jokes and comments that can be taken out of context to yourself. And if you must share them, send them to your friends in a private message. I don't like the idea of being talked about behind my back, but it's better than risking your internet reputation. Remember that girl who didn't mean to make racist comments against Asians in her UCLA video? I believe that she had to transfer schools and delete her YouTube account. Anything can go viral within a matter of hours. That's not to say that you shouldn't express your opinion, but that you can do so without coming off as a jackass.

1. If you feel like you're being rude, leave a disclaimer at the bottom of your comment. Usually your instincts are right. This will save you a little face.

2. If you're angry or generally emotional, step away from the computer. Take a deep breath and return ten minutes later. If you're still upset, repeat those steps.

3. Refrain from making offensive comments towards others in public forums. Make the conversation private.

4. If your opinion is controversial, it might be best to keep it to yourself. If you're against Prop 8 or you don't think Obama is an American citizen, why would you want to broadcast it to the internet?

5. If you're new to the internet, you might want to sit back and lurk. Learn the ropes before you make a fool out of yourself.

Remember, just because you're online, that doesn't mean you're not talking to human beings. Be polite. Be courteous.  And don't be a n00b. n00bs can turn into trolls very quickly in internet land.