We at the Book Lantern have had many a discussion in relation to the dystopian YA craze and its implications. With many of this year's dystopian releases coming from debut authors, I was particularly excited to find out that the third book in one of my favourite dystopian series from my adolescence, Julie Bertagna's Exodus, Aurora, would be among the releases (I talk about the series in my Scottish YA post here. Julie was kind enough to answer a few questions on the genre, writing and being part of the craze.

1. How does it feel to be an author with an established series releasing a dystopian YA novel in the height of this latest publishing craze?

It’s both odd and exciting. When Exodus was published there was nothing like it at all in YA fiction and I was warned that the book might not sell well because young readers weren’t really into futuristic fiction these days.... well, I never agreed with that view because when I was a teenager I loved to read books set in the future - big, bold stories that took me right out of myself and my day to day problems and set my imagination on fire. I couldn’t see why today’s young readers wouldn’t enjoy that too - and of course they do. People all around the world have enjoyed Exodus and it’s been on many shortlists and won prizes, as has the sequel, Zenith. That’s been thrilling and unexpected. I couldn’t be happier that there is a ‘dystopian craze’ and for my books to be part of it - because I love reading fiction that presents visions of the future.

2. Who and what were your main influences in writing Exodus, Zenith and Aurora?

Writers like Margaret Atwood, William Gibson and Ursula Le Guin and their provocative and disturbing visions. Also Philip Pullman’s His Dark Materials - brilliant books that proved that young readers were really up for big, extraordinary stories. Ancient flood legends were an influence too because I found out that every culture in the world has a flood legend set in the distant past. So many ideas came from the real world - the Kiribati islands amid rising seas in the Pacific, Bangladeshi boat camps of flood refugees, rampaging sea pirates, the bio-architecture of the sky city towers, and walled cities in a time when we are debating the problems of refugees flooding into ‘Fortress Europe’. Fiction about the future always has a big punch when you can glimpse your own world in the imagined future of the story.

3. The genre's something of a blanket genre with so many varying elements and tropes. How would you define dystopian YA and what do you think are the most important elements of a strong dystopian novel?

I don’t like defining fiction too much as that can limit it and stifle ideas. Dystopia tends to mean a society that’s become warped in some way, controlling human destinies and stamping on the individual. “If you want a vision of the future, imagine a boot stamping on a human face - forever,” wrote George Orwell in 1984, the most famous dystopia of all, where Big Brother is always watching. You’re right, the ‘dystopian umbrella’ now includes any kind of world-gone-wrong scenario. My books are actually apocalyptic, with a dystopian element - I’ve started calling them ‘dystopalyptic’!

One concern with some of the current YA craze - and I loved The Book Lantern’s hot debate on this - is that the dystopian backdrop can sometimes seem like an excuse for a slightly predictable girl-lusts-after-hot boy romance and the world-building can be thin. For me, the crux of a really good dystopian or futuristic story is the world-building. Does the author have a new Big Idea and create the world of the story so convincingly that you believe in it all and feel you’re right there, on a journey like no other, with characters you really care about? I think that’s the key to a great book.

4. Dystopian YA has been marketed lately as the new craze to take over from paranormal romance. Do you think the genre can be as popular and well selling as the paranormal books that have flooded the market in recent years? Does it have the same level of staying power?

I don’t think paranormal is dying off anytime soon. Dystopian trilogies are about to flood the market in the next year or so (just as well I got in early!) and it’s fantastic that readers have so much choice. I actually think that a good dystopian novel has more staying power because of the strength of the ideas - if it’s done well. But it comes down to what readers like and want more of, and that’s impossible to forecast. I love the unpredictability of the YA market where anything can burst through - it means the readers have the power.

5. What, in your opinion, is the intrinsic appeal of dystopia for teens?

At a time in your life when you are no longer a child, but don’t yet have the freedom and power of an adult, you perhaps feel that others control your destiny. Dystopian fiction takes you right out of yourself and your everyday life and plunges you into a whole new world where you are immersed in the adventures of fictional characters rebelling against a world gone wrong. It’s exhilarating - a kind of freedom. You can escape problems in your own life that may seem overwhelming and maybe put your own struggles in perspective when set against the plights the characters face in a dystopian novel. You come up against all of life in these books - love, death, pain, power, excitement, choices that determine individual destinies and perhaps even the fate of a whole world.... and are left with a lot of new ideas to wonder about, that make you look at your own world in a whole new light. Brilliant stuff. What’s not to like?!

6. Most of the most famous and well renowned dystopian novels have strong associations with political and moral commentary, e.g. "1984", "The Handmaid's Tale", etc. Can such things be effectively translated to a younger audience?

Definitely. I see elements of these classics in many of the new books. In adult dystopia the main character is usually annihilated and all hope is gone (1984) or else you’re left reeling, with no answers (The Handmaid’s Tale). In YA fiction, there tends to be seeds of hope for the future. In my book, Aurora, the ending is a new beginning (which might drive people crazy, but I just cannot not do predictable endings; I’m allergic to them.) I think you can -  and should - write about anything for young readers. The way to do it is to show what the characters in your story are up against, let the reader see and feel what’s at stake - and I’d rather leave young readers with hope than utter despair. I think that’s the crucial difference. 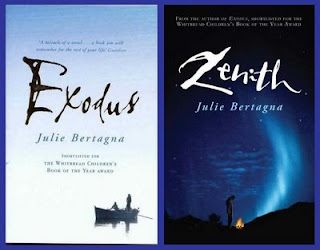 7. We at The Book Lantern are serious sticklers for originality in genre fiction, especially during the midst of a publishing craze. In the case of dystopian YA, there's been much criticism in the originality of the stories and universes created e.g. Ally Condie's "Matched" being seen as a copy of "The Giver", Lauren DeStefano's "Wither"'s, comparisons with "The Handmaid's Tale", etc. As an author, do you feel pressure to stick to the genre conventions whilst still creating something new and original? Is that even possible these days?

Creating something new and original is the very essence of what I believe you must try to do if you want to be the best writer you can be. (We are of the same mind here, Book Lantern-ites, that’s why I’m drawn to you!) The pressure I feel is my own passion to write the very best story I can - I truly don’t want to be constrained by a trend or genre or convention. Because if I had done that, I’d never have written Exodus (remember, I was being told that young readers didn’t like that sort of thing.) So my job is to forget about all that and write the story that grabs me, in the most exciting and original way I can - to stay true to my own imagination. That way you people, hopefully, get the range and quality of books you deserve, and not just a flood of whatever copycat trend marketing departments find it easiest to sell to you.

I don’t think there’s a problem at all with writers being influenced by other books or ‘re-writing’ classics, as long as it’s done with originality and verve. You must do something exciting and new with the idea. After all, you could argue that I stole my idea from Noah.... ; )

8. Now that "Aurora" signals the end of the Exodus series almost a decade after it started, what is next for you? (Feel free to miss out this question if you don't know/are under a secret contract of deathly doom that I imagine exists in the deep dark bowels of publishing/etc.)

Yes, I must avoid the doom spell and the deep dark bowels that will be my fate if I say too much. The next book is very different - it begins a couple of decades from now (in a dystopian world gone wrong...) but the story literally takes us out of this world (sorry, can’t tell you how: big spoiler) into a cosmic adventure where Riven, my gutsy and wayward young character, discovers a truth that turns everything she’s ever known on its head - the whole history of humankind. There’s big love, death, loss, meddling scientists, a delicious alien, looming catastrophe on a cosmic scale... how does that sound?!

9. And finally, please recommend a few books to our blog friends, dystopian or otherwise.

These are a few of my all-time favourite reads, well worth seeking out if you like dystopian fiction:

The Last Man - Mary Shelley (Mary was a teenager when she wrote Frankenstein, the first modern sci-fi fiction, and The Last Man is one of the first-ever dystopian novels).
The Left Hand of Darkness - Ursula K Le Guin
Woman On The Edge of Time - Marge Piercy
Never Let Me Go - Kazuo Ishiguro
The Ice People - Maggie Gee

Thanks so much for letting me visit. I’m so glad I discovered The Book Lantern late one night when I couldn’t sleep.

Thank you SO much for letting us do this and good luck with the release of "Aurora!" Can't wait to get my hands on it.

Aurora is published by Macmillan Children's Books and is available now in UK.