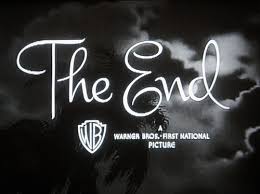 Les Edgerton wrote the book on beginnings, and there are quite a few manuals out there that discuss the topic of writing, not to mention selling, a book. We on the Lantern have discussed the Power of Hype, the pros and cons of trilogies/quartets/sagas and stand alones, the Quality vs. Quantity debate, and while I want to say that Art is The Most Important Thing and that we should make all the sacrifices it demands, it is also true that whether you’ll be making your livelihood as an author depends on whether or not your book sells.

So naturally, while the idea should be fresh and awesome, it should also be adapted in a way to appeal to the reader (catchy hook, beautiful cover, nice script). Hence, the emphasis that is placed on beginnings. But how many times, when reading a review on Goodreads or Shelfari or Internet blogs you come across this phrase, or a variation thereof?

“The book was great, but the ending really bugs me.”

It’s a loaded statement, and it proves what I came to suspect a while ago: Endings are just as important, if not more, as beginnings. In fact, I am going out on a limb here by saying: A good beginning might sell a book to the reader, but a good ending might win you (or at least the series you’re writing) a devout fan. Someone who will come back and read whatever you put out, whether it’s books, blog posts, or even your old fanfiction dot net account (I’ve done it, and I suspect many new fans of Brennan and Clare have also done it, and thanked the brave ones who saved PDF copies of their fics). A good ending makes the readers come back.

Just a clarification: By a good ending I don’t necessarily mean a happy ending. To illustrate my point, let’s look at A Clockwork Orange. This book originally had three parts, each 7 chapters, but the American publishers initially got Burgess to remove chapter 21, presumably because the audiences wouldn’t be sold on it. The hipster in me immediately goes: “Dude, the original is the only True version,” but the reader in me pauses to reflect.

The protagonist or A Clockwork Orange, Alex, starts off as a young man of 15 who is fond of drugs, B&E, arson, battering, Beethoven, ultraviolence and the ol’ in-out in-out. The book follows his journey through adolescence in prison, where he is used as a guinea pig for a new reform method very similar to aversion therapy. After he gets out, he finds he’s unable to defend himself in a world where his only pleasures are taken away and where his old victims are very much keen on revenge. He raises some stink, and the authorities backpedal. Chapter 20 shows him cured from his cure and able to go back to his ways. Chapter 21, however, is him growing bored and weary of them, accepting that they were wrong, and thinking about starting life as a good citizen.

In a way, it’s not bad. Burgess used 21 chapters to symbolize the age of maturity, and how Alex comes to realize that the things he believed as a teenager were wrong. But as far as an ending to this particular book, it’s pretty lackluster. A Clockwork Orange deals mostly with human nature and the questions on whether it is ethical, or even right, to enforce a behavior on an individual by breaking down his own free will, even if the said individual is a monster. Alex is unapologetic about what he does, and that’s the thing that didn’t sell me on chapter 21 – I just couldn’t believe that someone who enjoys rape, violence, and misery, could simply say “Hey, you know what, I’m tired of being a sadist, and it’s wrong. I want a wife and son and regularity!”

That sets what I think is important to endings: It has to be consistent with the feel of the book. Whatever you may choose to do to your protagonist – 2.5 kids and a picket fence, or a swan dive off a roof – has to ring true to the rest of your book.

That said, let’s look quickly at the different types of ending there are.

#1 “And they lived happily ever after,” is probably the most common of endings (or, at least, the one expected most often). It leaves no plot threads hanging, everyone’s got what they deserved and wanted and things just can’t be better. General consensus: Sweet, but unrealistic.

#2 Happy for now is a variation of the HEA which is more favored nowadays simply because people know that life isn’t peaches and roses and that the heroes meet hardship. It’s an ending which provides sufficient closure without a wedding, engagement, white picket fence and a credit card that’s got no limit. It usually has some questions left hanging, but not too many to invite a sequel. The Discworld books have happy for now endings. Isabel Allende’s books have happy for now endings. General consensus: It’s a realistic way to end a book.

#3 Cliffhangers. They can be good and they can be bad. The ending for Becca Fitzpatrick’s “Crescendo” has become infamous as bad cliffhanger, as well as the ending of “City of Fallen Angels”. But it can’t be denied that cliffhangers can be used for good, especially in series – it wraps up the existing storyline but offers a glimpse of the conflict in the next book. The ending of “White Cat” by Holly Black is a good example – the conflict of the book is resolved, but another one is created, one that has to be dealt with. A million thanks to Lucy for reminding me of the Harry Potter books, which also do a fantastic job at using cliffhangers as a way to hook the readers without frustrating them. General consensus: Proceed with caution.

#4 Bittersweet. This is closer to the HEA or the HFN endings, but not quite. It’s an ending where resolution comes with the death of something – sometimes the protagonist, sometimes just a symbol, or a period of their lives. The easiest example I can think of is a coming-of-age story that involves the death of childhood. Think of “The Book Thief” or “The Hero of Ages”. Mind you, they can also be tear-jerkers, but not necessarily. It’s a nice symbolic way to show how your heroes’ goals have changed over the course of the book. General consensus: My favorite kind.

#5 Whiplash is the kind of ending that really makes your head snap around. It’s that little twist that you never saw coming, that thing that leaves you gaping at the book and screaming when you turn the page and realize you’re looking at the acknowledgements (actually, that’s a marker of any good book, not just good whiplash endings). Such an example is “The Wasp Factory” by Iain Banks, “Genesis” by Bernard Beckett and, to a lesser extent, “Notes on a Scandal” by Zoe Heller. It’s a hard one to pull off, because by the end, the readers would have guessed/learned all there is about your character, and you need to be really sneaky with the clues in the text so that it doesn’t come off as ham-handed. General consensus: Pretty high piloting.

Those are the type of endings I can think of for now, but there are so many out there, and different for everyone. So I’d like to ask you now – what are your favorite kinds of endings? Is there a particular book you think can be a category on its own? Would an ending sell you on an author, or do you need more than one book to decide if you’re a fan?