Women in Horror – a Brief Primer.


Since it’s Halloween, I thought it would be fun to talk about women in horror movies. I must confess that I’m not the biggest fan of modern horror movies because I am a complete wimp. My main interests lie in the Universal monster films of the 20s and 30s as well as some of the RKO films from the same period (Cat People is a particular favourite), Hitchcock movies and good old Hammer Horror, although there are some horror films outside of that period that I love, and will mention later.

An interesting thing I found out whilst researching this post was that horror movies are more likely to pass the Bechdel test than films traditionally aimed at women, mainly because the female characters present are more concerned with not dying than getting the guy. However, this doesn’t give the genre a free pass in terms of female representation. I’m sure we’ve all seen at least one slasher movie where the scantily clad girl is chased screaming and crying around the house by a masked weirdo. Of course, there’s also the age old horror movie rule regarding bad behaviour, virgins, and the last girl standing. Horror can be a double-edged sword for women: a mixture of passivity and autonomy, equal parts likely to save the day or be slaughtered horribly. The Scream Queen is a staple of horror film history, even when said films were silent (“Nosferatu” and “Phantom of the Opera” are two examples).

I should note that this list is in absolutely no way comprehensive and I’ve probably missed out a bunch of amazing women positive horror films simply because it’s not my preferred genre, so please leave your own recommendations in the comments section, and maybe some books as well, particularly YA. I would also highly recommend the BBC series “A History of Horror with Mark Gatiss” if you can find it. Who doesn’t want to hear Mycroft Holmes talk about vampires?

In the 1930s and 1940s, Hollywood was in the middle of a horror boom thanks to the now iconic Universal monster movie series, featuring the likes of “Dracula”, “Frankenstein” and “Phantom of the Opera” (all of which I’d recommend, particularly the last one, but only the silent one). Other studios started trying to jump on the bandwagon, with varied levels of success. RKO hired producer Val Lewton to quickly make cheap horror movies for the studio with eye-catching titles, and “Cat People” was the first produced. “Cat People”, the story of a young Serbian woman called Irena who believes herself to be descended from an ancient race of people who turn into cats when sexually aroused, is one of the pioneers of the horror genre. If you’ve ever watched a scene where tension is built up slowly and quietly, only to be broken with a jump scare, then you have this movie to thank or blame (it’s a technique known as the Lewton Bus). Full of shadows, ambiguity and the ever unseen threat, “Cat People” is also an interesting case as the feared figure of the story is a sympathetic woman and her sexuality. For a film made in the 1940s, it’s a pretty progressive route to take, particularly given the heavy levels of censorship films were subjected to thanks to the Hays Code. The 1982 remake is an entirely different kettle of fish, one that’s way trashier and more incestuous (and has music by David Bowie), but worth your time. Just don’t expect quite the same level of gender progressiveness.

Ridley Scott is sort of a feminist hero. Between “Alien”, “GI Jane” and “Thelma and Louise”, Scott has been one of the pioneers of portraying progressive, non-sexualised women in autonomous roles in film. They’ve got agency, they’re not obsessed with sex, and they don’t exist solely for the male gaze. The “Alien” franchise features one of the most popular feminist characters in film – Sigourney Weaver’s Ellen Ripley, although interestingly, she isn’t really the protagonist of the first film until about halfway through. Before that, she is one part of a diverse crew, where gender really doesn’t matter. This is something that the sort-of-but-not-really prequel “Prometheus” also pulled off successfully, although the film as a whole is not quite as good (worth seeing for Noomi Rapace, Michael Fassbender and one very disturbing scene). Better people than me have written about Ripley’s influence on film (including this fantastic essay.)

I’ve always been somewhat sceptical of Wes Craven’s given moniker of being the master of modern horror, but his influence on the genre cannot be denied. While his arguably most famous franchise does employ many of the tropes of the slasher genre seen in earlier films such as “Halloween”, “A Nightmare on Elm Street” also successfully subverts them and created, at the time, something very new. Since Freddy Krueger has become so synonymous with horror and became a bit of a punch-line in the later movies, it’s hard to remember just how straight up trippy and different the film was upon its release. It’s a genuinely terrifying concept – you can maybe outrun a knife-wielding man in a mask but you can’t beat your own body’s need to sleep. Nancy Thompson, the film’s protagonist, may embody some of the tropes of the innocent virginal last girl standing, but she’s also incredibly smart young woman who cares about others and confronts the demon full on. She breaks down the rules imposed on young women in horror by earlier films and, using her resources and a fierce intellect, takes on the monster. Craven would later go on to do this with another pioneer of the genre, which I’ll discuss later.

Angela Carter reworks “Little Red Riding Hood”. Need I say more? Remember all the subtle sexual metaphors present in the original tale? Carter blows them up for all to clearly see then subverts the shit out of them, as she was prone to doing. The film’s about as subtle as a bag of hammers but that’s what makes it so interesting. It’s packed full of hypnotic and latent sexual imagery, brilliant special effects, and the exploration of sexuality, with bonus Angela Lansbury. The characterisation is somewhat weak, but I think that was deliberate. This is a piece way more concerned with ideas and imagery than characters. Sexing up fairytales seems to be coming back into fashion, so check out the master doing it first, with bonus Angela Lansbury.

Confession time – when I first read the Hannibal Lecter series aged 13 or 14, Clarice Starling was my hero. Having spent a large chunk of my youth reading gruesome thriller novels with stubborn and bitter male detectives solving the case, it was a huge deal for me to read a smart, determined and complex female character taking on the dark side of human nature. Pretty much every female detective of the past 20 years of crime fiction owes at least something to Clarice (which is why I was so heartbroken to see Thomas Harris shit all over my heroine with “Hannibal”, because essentially turning one of the FBI’s top agents into a broken zombie puppet is so empowering. I will seriously never get over this!) I classify the movie more as a horror than a thriller personally. The tension throughout is sometimes unbearable, and the scenes between Jodie Foster’s Clarice and Anthony Hopkins’s now iconic Hannibal Lecter are the stuff of movie legends. It’s important for me to note that “The Silence of the Lambs” features some less than progressive elements in relation to gender and sexuality with the inclusion of the villain, known as Buffalo Bill. It’s easy to toss these criticisms aside as simply ignorance of the time (although the film was released amidst a growing demand for better LGBTQ representation in a medium that tended to portray them as psychos and victims) but it’s important to not overlook them.

Time for more Craven. This film was a staple of my childhood, along with “Friday the 13th”, and the pair feels like a natural double bill. Once again we have Craven paying homage to the genre that made his name while subverting the hell out of the rules he helped to create. It’s got enough self-awareness and sheer wit to pull off what is an impeccable satire of both horror movies and our attitudes towards them. It’s also genuinely funny, yet the dark humour never overshadows the shocks, which come thick and fast even to those who know all the rules. Sidney Prescott is a whip smart and often very cynical heroine shoved into an unenviable situation and reminds me of Nancy Thompson in many ways. I recommend the first two sequels with hesitation (haven’t seen number 4) but nothing beats the first, which still feels fresh to this day. 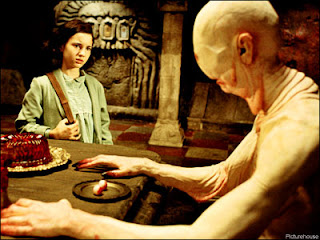 Let’s get this out of the day. “Pan’s Labyrinth” is most definitely a horror movie, not a fantasy, because the scariest thing in the film isn’t the fairy-tale creatures (although the Pale Man comes pretty bloody close) but the all too real horror of Franco’s Spain, a period in history that is still raw for many. I’m a total sucker for film-makers who can deftly combine the beautiful with the grotesque, and del Toro is arguably the best in his field right now (would somebody please give him money to make his Lovecraft film?) While “The Devil’s Backbone” is more traditional Halloween fare (and I also highly recommend it), I prefer “Pan’s Labyrinth” because of its sheer imagination. There’s enough creativity in this to fill ten generic Hollywood slasher films, and the heroine Ofelia is the true personification of the complexities of being a child (because, let’s face it, being young really sucked sometimes). I adore del Toro’s work (my favourite film of his, and actually my 20th favourite film of all time, is “Hellboy 2: The Golden Army”) and would recommend anything of his, but for a suitably spooky selection, try his loosely connected Spanish language horror trilogy of “Cronos” (a vampire movie with a mythological twist), “The Devil’s Backbone” and “Pan’s Labyrinth”.

As I said above, I’m sure there are many more I’ve forgotten about or just haven’t seen, but I hope this is a good place to start off, and I hope you have a wonderful Halloween. As for me, I shall be in my pyjamas eating cake and watching black and white horror movies and ending the night in the traditional manner with a jump to the left…. Enjoy!