On Gender in YA: The Imagined Life of Joan Green.

Posted by Ceilidh
There’s been a lot of talk lately in regards to the gender make-up of the New York Times Young Adult best-seller list. For all the pearl clutching panic and sexist sneering exaggerated panic claiming that boys don’t read YA because the market’s so female dominated, the numbers really don’t reflect that, as the wonderful and eye-opening research at Stacked shows.
The market, like publishing and basically every other area of life in general, is mostly male powered, even with Veronica Roth selling over half a million copies of “Allegiant” in the first week of release. This is no surprise for the women who have been talking about this for years. Look at Jennifer Weiner’s continued efforts to have the New York Times Book Review acknowledge the power of the female market in the face of mass ignorance and criticism. Stacked’s wonderful article points to a discussion that unfolded on Twitter between John Green, E. Lockhart and Maureen Johnson that revealed much about the blindness that comes with privilege. I’ll let Green’s words speak for him and tell you to check them out here but it also leads to a question I’ve been thinking about for a long time.
Would Joan Green be as successful as her male counterpart?
Here me out.
A huge chunk of Green’s publishing power comes from the platform he created with his brother and their web-series. While I’m not a fan myself, it’s hard to deny that he’s created something that appeals to a huge audience who put their money where their mouth is. He’s a conventionally attractive, witty and intelligent individual with market savvy and it’s paid off marvellously when combined with his equally marketable and well received books.
But honestly, I’m not so sure this would be the case if he were a woman.
The number of women in the table of highest rated YouTube videos is disproportionate to the number of men (only 17 of the top 100 according to the Daily Dot), and it’s not hard to see why. Just look at the vile threats any woman in the public eye with a foot in the geek sphere receives.
Feminist Frequency’s Anita Sarkeesian was threatened with rape, death and a whole host of other disgusting acts for daring to set up a Kickstarter dedicated to the theme of sexism in video games. Check out the sheer number of videos claiming to refute her claims that are basically just misogynistic spiels. Someone even went as far as to create a video game where users could beat her face bloody. When Gamespot’s Carolyn Petit called out sexism in the latest “Grand Theft Auto” game (after giving it 9/10), she received equal levels of abuse, including a hefty dose of transphobia, and a petition was even started by some offended men to get her fired from her job. Lindsay Ellis, the Nostalgia Chick from Channel Awesome, has talked of the sexist abuse she’s received in the past. Sex positive vlogger Laci Green took a month long hiatus from YouTube after the death threats escalated to the point where someone sent her photographs of her home.
I say all this because I think it’s important to understand the context which women are forced to work in. It’s 2013 and female writers still have to justify their work as being something other than ‘chick lit’ regardless of its subject matter. When the Man Booker Prize was awarded to Eleanor Catton this year, the Times still focused on her appearance. And when articles are written on the saviour of YA by publications like Time, the mantle is still given to a man. It’s given to John Green.
John Green can make countless web-videos on a notoriously sexist website to comparatively little of the backlash his female counterpart would receive. He would certainly be subjected to far less rape threats, death threats and mockery of his appearance than Joan and Hannah Green, the Vlog Sisters would. The ‘fake geek girl’ title would undoubtedly be thrown around.
John Green is praised for accurately capturing the voice of a young woman and the diversity in his work. Joan Green is repeatedly questioned over the decision to write about young boys, whether this excludes potential young female readers and if she feels her voice still sounds female. (This also brings up a side point on the way we praise privileged white writers, both male and female, for including diversity in their work while overlooking the disparities in diversity of the industry itself. It’s all well and good for us to praise white writers for including people of colour in their stories, but maybe we should look beyond them to the writers of colour telling their own stories, as well as LGBTQIA authors? This is another post for another day.)
John Green talks about the need to “begin a conversation about why” the market is male dominated. Joan Green would have been leading this conversation for years with little to no attention paid to it. She would be called a bitch and a Feminazi where John Green acknowledging that women are real and exist is rewarded with praise. Remember Joss Whedon’s recent comments about feminism? Remember how angry they made you and remember the sheer number of people who defended a man trying to commandeer a conversation on something he’ll never experience because he made Buffy? Men don’t get a pat on the back and instant attention for pretending they care about sexism.
John Green receives a large amount of coverage from Time and Entertainment Weekly. The best Joan Green can hope for is one or two Shelf Life posts. 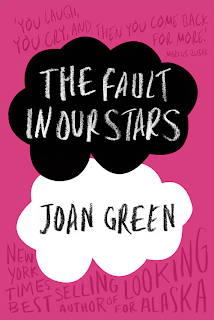 John Green is hailed as a saviour of YA. Joan Green is widely ignored or at best included in yet another conversation wondering why YA is so female dominated and how this will effect young male readers.
People talk about how adorkable and cute John Green is. Joan Green is too fat, too ugly, too plain, showing too much skin, who the hell does she think she is, tits or GTFO.
David Levithan’s collaboration with John Green spends weeks on the New York Times best-seller list. A similar book co-written by Joan Green doesn’t even chart. Don’t believe me? See his book written with Andrea Cremer.
John Green’s work receives gender neutral and simple covers with wide crossover appeal. Joan Green is subjected to kissing couples, pretty girls with their hair flowing in the breeze and a shit load of pastels. That or she’s forced to call herself J. Green.
John Green writes contemporary stories of drama, comedy, coming-of-age and romance. Joan Green writes romance.
This is hypothetical, of course, but given the trends we’ve seen time and time again appear in the publishing industry, it’s not hard to come to certain conclusions. I’ve lost count of the number of threats I’ve received online for daring to voice an opinion, and the things said about my appearance are best left from civilized blogs. Joan Green would never be able to benefit from a visual medium in the same way a man can because she can’t win. She’s either too ugly to exist to accused of slutting it up for men. Her literary merit would never stop being questioned because women still only write books for women that are full of kissing and therefore have no worth. I’m not sure John Green is aware of the immense privilege he possesses by being a man in publishing. If he does, it’s with a very narrow scope of the situation.

This isn’t really about John Green. It’s about an industry that continues to live with huge gaps in gender while shrouded in an assumption that equality exists. It’s about every other corner of the publishing industry that views women and their stories as second class and gives men’s voice instant authority. This is a far more complex and nuanced issue than I’m really able to discuss – the topic of best-seller lists, how they’re calculated, publisher clout, gender issues in wider media etc, are all there and must be acknowledged. Women can tell their own stories. We just need to listen.