Thoughts From a Zoella "Fangirl"

Posted by K
By now you would have all heard about "Girl Online", Zoe Sugg aka Zoella's debut novel. (And yes, that is actually how her name is written on the book.) It made a lot of waves over the past few days, first by becoming the fastest selling debut of all time, and then because it was revealed that it was ghostwritten by Siobhan Curham.

There's a lot that can be said about the whole "controversy" (and Ceilidh expresses a lot of them here and here) (and, for good measure, I highly recommend this post by London Beauty Queen, who is, to me, one of the most honest people on the blogosphere, and this one, which details the ideal world lemonade that can come from this controversy.) Traditional media have jumped on the bandwagon fairly quickly, moaning and groaning about celebrities cashing in on their brand and fooling their gullible young fans...

Actually, I'd really like to talk about the fans here. Seeing as I'm one of them.

Yes, I watch Zoella. I watch a lot of YouTuBe-rs . I started off by looking for ways of putting on make-up for work and ended up getting sucked in. If you want me to explain the appeal of YouTuBe beauty and lifestyle videos, I would probably describe it as "Facebook, but it doesn't really feel like your friends are trolling you with their perfect lives." I'm not active in the community, I don't go to Tumblr, and I certainly don't follow their break-ups and get-togethers, although I do own a few Tanya Burr Cosmetics products. (The nail varnish is super difficult to get off, but the lip glosses cured me of a phobia I didn't even know I had until I started wearing make-up.)

When Zoe announced that she was writing a book, (not gonna lie again) I put it on my Amazon wishlist. Later, I took it down during a wishlist cull, (as you do,) because let's face it, I have enough books to read, and the blurb made it sound awfully autobiographical, which isn't a bad thing, but it was not my cup of tea.

But I kept it at the back of my mind. As the release date approached, I even thought about reviewing it, partly because I was curious and partly because of this post, in which Zoe talks about hate on the Internet and how upset it made her that her friend didn't want to be in her vlogs anymore because she (the friend) was getting so much hate from fans. I thought about "Girl Online" and wondered - it touches on anxiety and being on the Internet, perhaps it will have something valuable to say. If there is a YouTuBe "celebrity" that has licence to talk about the not-so-pretty aspects of being an online content creator, it is Zoella (although, recently a lot of bloggers and vloggers have talked about their experiences with getting hate and they all make fabulous, valid points. All posts highly recommended, and yes, I think Zoe does a great job of talking about negative things. It's good that she sets an example of being open, but this only makes the most recently controversy worse in my opinion.)

I haven't bought "Girl Online." I don't think I will anymore. When the news that it was ghostwritten hit, I was honestly a little surprised - from the online previews of the book, it didn't strike me as the work of a published author with several novels under her belt. It genuinely seemed like something a new writer would produce. But then the news kept coming, and my feelings changed to annoyance and finally, today, to anger.

The annoyance was easy enough to unpack - every single post I've read about this "controversy" tends to describe Zoella's fans as a unified body of brainless, impressionable, consumerist zombies that have no appreciation of real literature or real life. (At least that's the impression I'm getting from reading these articles.) Adults looking down on teens - quelle surprise!

But the anger I couldn't identify fully. Not until I remembered about this post I'd read way back in July, and specifically the image that accompanied it. 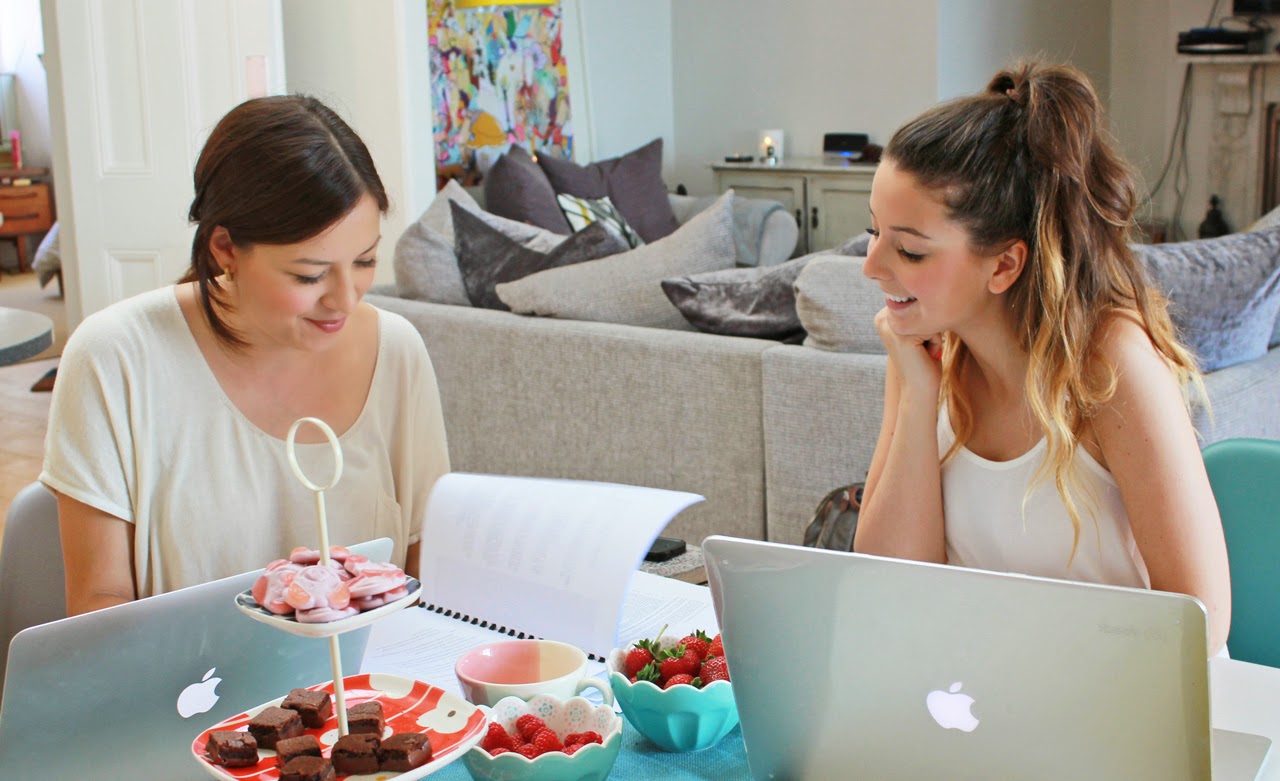 First time I saw this, I was like: "Damn, if I ever get an editor, I am so getting one of those cake stands. And I'm making macaroons." It just looked so pretty and dainty and idyllic, two women hard at work on their macs while the lighting was perfect and they poured over the manuscript.

If it were me, I'd probably be sitting cross-legged on my desk chair, Skyping with the editor, stress ball in one hand and a box of tissues on standby. (And then I'd make macaroons, because there's nothing more relaxing that whipping a meringue in submission.)

This is the reason why I'm angry, and why I think more people would be angry, about this controversy. Not because it's ghostwriting (which is a time-honoured practice in the publishing world,) and not because it's just the thing that is done (as some bloggers, and even Zoella's publishers, are quick to point out,) but because of how it was presented and framed: "writing books" is apparently all macaroons and cake stands and pristine Macbooks. (I can't help but think about all those writers whose blogs I follow who document every excruciating day of NaNo or just their regular writing lives, who talk about everything from inspiration bursts to writer's block to depression.) And then we get Zoe's friends putting "Girl Online" in their favourites videos and talking about how much they liked it and how proud they are of her for the work she did on the story... it all just leaves me with a horrible taste in my mouth.

And no, I don't buy the "it's just what's done, ghostwriting is a thing about celebrities" excuse. I'm more than happy to buy Tanya Burr's lipglosses, but I don't for a second believe that she "makes" them by herself, (i.e. she goes to Eye Candy labs, dons on a lab coat and mixes together the ingredients, adjusts the pigment, scent and formulation, does the testing, names them and designs their packaging.) "Girl Online," meanwhile, is presented as this Cinderella story of a girl with a blog who is given an opportunity to achieve her dream, and then we discover that the book was ghostwritten?

So much for your YouTuBe favourites not trolling you with their perfect lives, I guess. Where do we go from here?