Read It With Me: Before I Die 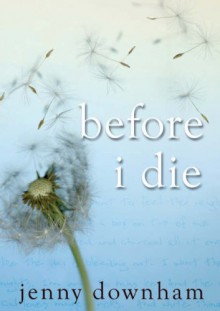 I don't know if I'll be picking "Bumped" up again. It's not that I don't love that book - oh, I love that book - but doing chapter by chapter deconstructions is hard work, and not always an easy one. Major kudos to Ana Mardoll and the folks at das-sporking for keeping it up, week after week.

That said, I can manage doing a first chapter read-through, highlighting the best (and worst aspects of a book) so that if you're curious about a read, you can check out the Amazon preview and take part in the discussion.

Anyway, "Before I Die" is a book I've spoken about several times over here, and it's also one of the books the Daily Mail slammed as "sick-lit" in an article not too long ago. Not linking because Monday is bad enough without being enraged at other people's views, but if I were to sum it up in one sentence, it would go something like this: "Publishers are flooding the market with books about sick kids and it's disturbing."

Entre-nous, find it a lot more disturbing that children with mental health issues need to go to charities for their support, and that hospital cancer wards also frequently rely on fundraising (one might wonder what public spending is going for?) because people are just not talking about these issues, but hey, I'm just one lousy taxpayer.

I'm not saying that all books that deal with physical and mental illness are amazing - plenty of them use the illness as no more than a prop, or worse, a tearjerker, to an otherwise bland story, and then again use the illness as a way to escape criticism. But I think that, like many other things, talking about something is the first step to helping the sufferer, so if YA books help us with those conversations, then I'll accept the bad with the good.

And I think that "Before I Die" is definitely one of the good ones. The main character, Tessa, has been living with cancer for years, and has gone past the point of cure; the novel, however, focuses on a lot more. Tessa' desire to fulfill every item on her bucket list a backdrop against which the novel explores themes of love and friendship, of bereavement, of family, and depression.

And the first chapter manages to have all of that rolled into one.

I wish I had a boyfriend. I wish he lived in the wardrobe on a coat hanger. Whenever I wanted, I could get him out and he'd look at me the way boys do in movies, as if I'm beautiful.

Tessa is not happy about her diagnosis. She focuses on her list as a way to ignore the pain and depression, and at first puts very mundane things on her list. Having sex. Doing drugs. Committing crime. She wishes, in her opening lines, for a boyfriend, but not in any real sense - she imagines him, literally, as an object she can access at her whim.

And yet, underlying the objectification is a desire for connection, for something that she's only seen in the movies.

He wouldn't speak much, but he'd be breathing hard as he took off his leather jacket and unbuckled his jeans. He'd wear white pants and he'd be so gorgeous I'd almost faint. He'd take my clothes off, too. He'd whisper, "Tessa, I love you. I really bloody love you. You're beautiful" - exactly those words - as he undressed me.

One thing I wish I saw more in YA are depictions of intimacy that aren't just stock phrases. Jenny Downham is pretty good at that - she uses as much, or as little detail as she needs to in describing how her characters act around each other, enough to create a resonance with the reader. Tessa's desire for a  boyfriend may be fairly stock, but her desire comes across loud and clear through the page.

It's not stated explicitly by any of the characters, but it's the day Tessa has gotten the bad news, and she's spent the afternoon in bed, only moving to write down bits and bobs that later become her list.

I sit up and switch on the bedside lamp. There's a pen, but no paper, so on the wall behind me I write, I want to feel the weight of a boy on top of me.

Tessa listens to the sounds her father and younger brother are making downstairs - her father making dinner, her brother coming back from the store. It's all very detailed - you can tell it's a routine in this house - but Tessa' tone, and the fact that she can hear things happening from way across the room, creates a sense of despondency. Almost as if she's looking in from another plane, or she's imagining what it would be like when she is dead. (She does that a lot throughout the novel.)

We also get a glimpse of her father and brother, and her interactions with them are pretty realistic, though a little confusing for the reader at first.

"Dad says, do you want blackberries?"
"No."
"What shall I tell him?"
"Tell him I want a baby elephant."
He laughs. "I'm gonna miss you," he says, and he leaves me with an open door and the draught from the stairs."

It's also pretty clear that Tessa is not ready to open up. She's not ready to open up for a grand majority of the book. She hides behind bravado, cajoling, making trouble, making love, but what it all boils down to is this: she's afraid, and she's vulnerable. In the first chapter, she's not ready to show that vulnerability; she almost expects others to read her mind. She's also angry with her father (though it's not explicitly stated) noting how he "looks like a Power Ranger" standing at her window with his hands at his hips - a pretty shocking thing to contrast with his gentle query.

She throws his kindness back to him, she's not ready to talk, she doesn't want blackberries; but she does want something.

She wants to be vulnerable. But she can't put it on her wall.

This is a very short first chapter, but it packs some serious punch. We get a sense not only of Tessa's relationships with others, but with herself as well. We get our surface plot - the making of the list - and a sense of all that is to come. Tessa is trying to be stoic, or rather, keep her emotions in check, but she doesn't like it, and the novel doesn't make any illusions about it either. Staying unresponsive to other people's kindness and emotionally withdrawn is presented as a bad thing.

And I like this. I'd rather have stoicism criticized in my books than have character after main character glorify it as something we should all be aspiring to, because bottling things up (from my own perspective) only makes it worse.

What about you? What do you think?

Side note: I'm running a half marathon to raise money for a charity helping young people with mental health issues. If you can help out, or even just spread the word, please visit my page here.